Each ice-fishing season can be roughly divided into three separate time frames: early ice, mid-winter and last ice. Over the course of the winter walleye make predictable migrations, much like they do during the open-water season. 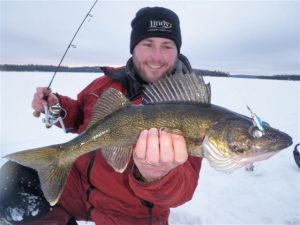 They move about under the ice and utilize different areas, depths and structures as the season progresses. Each different time frame requires unique strategies and locations for getting the best results. Early ice is highly regarded as a time for big fish and good action, if you know where to look. Here’s how to make the most of your early ice walleye fishing this winter.

There’s a generally accepted theory that early ice walleye can be found in the same locations where you left them at the end of the soft-water season. For the most part this is true, and it provides an excellent starting point in your search.

Early ice walleye will still be found relating to structure in and around the main-lake basin. The same prominent points, quick drop-offs, humps, reefs and deep flats that produced from late summer through fall are your best bets for early ice success. Bottleneck areas are another prime location for early ice walleye. Bottlenecks are areas where two sections of main-lake basin are joined together by a narrow passage. Think of them as oversized saddles, with deeper water on either side. These passages act as main travel corridors where you can intercept walleye that are moving around looking for schools of baitfish.

As for depth – early ice walleye are typically deep, as they were during late summer and fall. In the lakes I fish here in northwestern Ontario this means 20-to 40-feet of water. I tend to have my best success during early ice right around the 30-foot mark.

Ben Beattie is an outdoor writer and fishing guide based in Sioux Lookout, ON. For more information visit benbeattieoutdoors.com